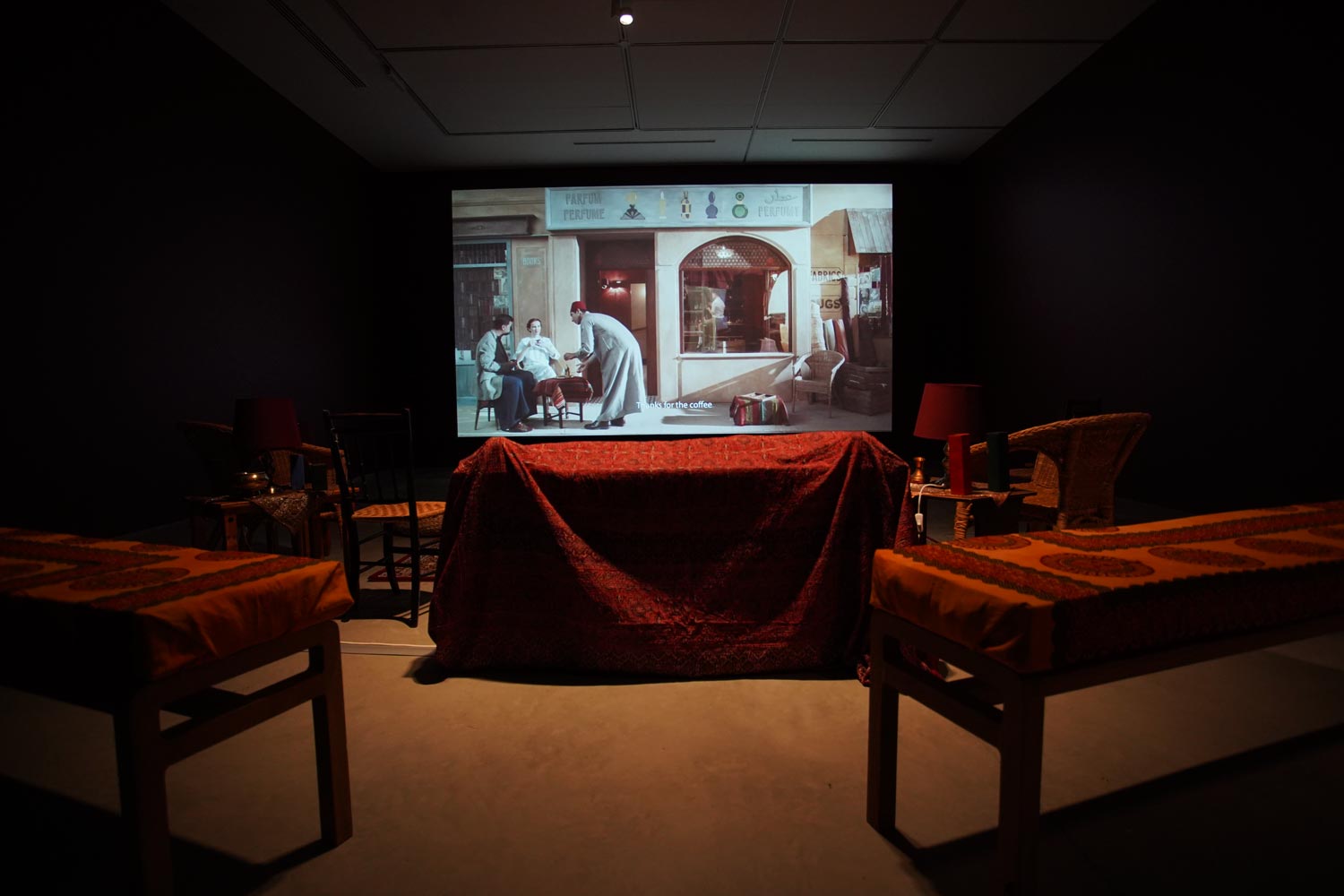 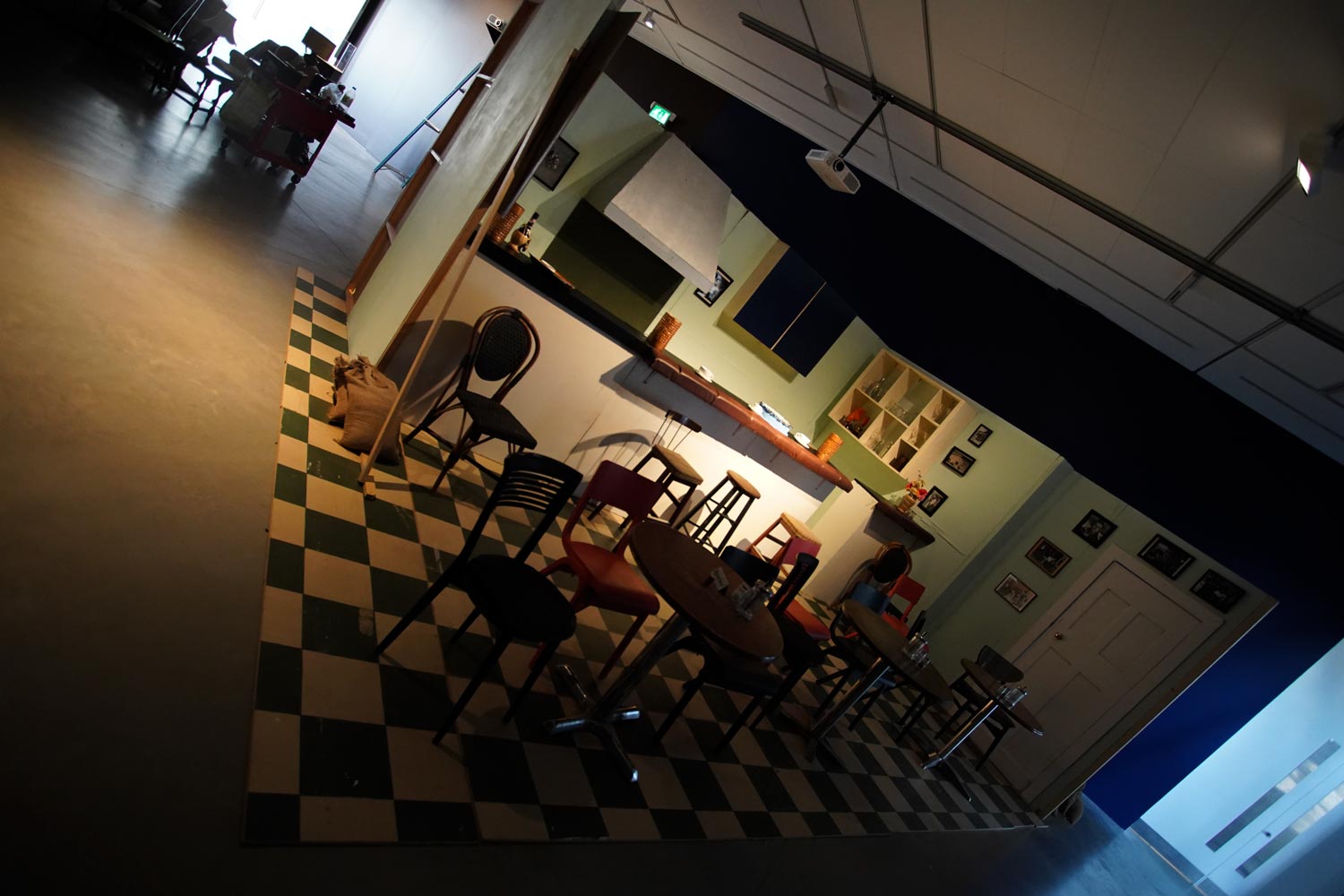 More than Stories is a trilogy of films inspired by Anya Lewin’s family photographs and stories, and their interconnections with screen history and public archives. Each film has at its heart the haunted memories of Jewish life embedded in a particular story passed down to Lewin by her father.

‘Fez: The Royal Scent’ (2019) has been made specifically for this exhibition and will be presented alongside ‘With Heartfelt Gratitude for the Painless Treatment’ (2008) and ‘Chez Paulette on the Sunset Strip’ (2013). ‘Fez: The Royal Scent’ completes Lewin’s trilogy of installations that will be shown here together for the first time.

These films take place in three different cities that Lewin’s family inhabited during their wanderings: Cairo, Berlin, and Los Angeles. Each of the films was shot within built sets that recreate the locations central to each story: a perfume shop, a dental office, a coffee house. Aspects of these sets reach out from the films and appear in the gallery space so that the audience becomes part of an expanded frame.

‘Fez: The Royal Scent’ takes place from 1926 to 1928, when Lewin’s father was a child, and his father and mother decided to leave Berlin for Cairo, Egypt, which had a large Jewish immigrant community. The film is shot in four languages: Arabic, French, Polish and English, acknowledging the multi-lingual environment the family would have found themselves in. Once settled in Cairo the family opened a perfume shop and Lewin’s grandmother – who had a degree in chemistry – invented a scent called Fez that was presented in a bottle in the shape of the common Fez hat. The bottles were stacked in the shop window when one day King Fuad I happened to drive past, stopped the royal car and bought all the stock. Fez became the Royal Perfume and the family stayed in Cairo for two years.

‘With Heartfelt Gratitude for the Painless Treatment’ blends the historical with the imaginative. Developed from an inherited and unexplained collection of autographed photographs of 1920s film and theatre stars who frequented the Berlin dental practice of Lewin’s grandfather, Dr Ignatz Lewin, the story tells of a Jewish Polish family, who fled to the USA in 1938, soon after Krystallnacht and before Hitler invaded Poland. The film travels through the Weiner Library archive to discover the original Berlin address of the dentist surgery to reveal a film within a film of the fascinating patients, with a nod to silent German Cinema.

‘Chez Paulette on the Sunset Strip’ brings together the launch of the European style coffee house in Los Angeles, the experience of Jewish immigration to Hollywood, the influence of Europe on Hollywood, and the blurring of fact, fiction, the real and the reconstructed.

In 1958 Max Lewin took over his family’s failing cake shop. Capitalising on its hip location on Los Angeles’ Sunset Strip, he turned it into a coffee house called Chez Paulette. With the help of Marlon Brando, who became a regular customer to help build its reputation, Chez Paulette became a popular Hollywood bohemian hangout favoured by actors, poets, folk singers and flamenco guitarists and dancers. At the same time as Chez Paulette emerged, along came 77 Sunset Strip (also 1958–64) one of the first detective television series. 77 Sunset Strip and Chez Paulette were brought together when a set of the café was built on the Studio lot, and featured in the series with Max Lewin as host.

These tales and tidbits, TV scenes, facts and momentary glimpses from photos in a scrapbook have been reworked, copied, quoted, and reconfigured into a film script and made into a film that is both finished and unfinished at the same time. As the director/detective figure in the film says, “there is no mystery, just history”.

Through community filmmaking charity City Eye, we were commissioned to photograph this exhibition.